Electric agents in boxing, an excerpt of a structural device, the sand back, moving close to the point, rhythmical sentences, law of motion a hard thing moving at no human pace, axis of geometric motion, when does the sand back return, do you know the ultimate course, the hand travelling at it’s determined course, force of motion equilibrate the bodily balance, angle of force, geometry of force, axis of body motion, lashing at the sand back, effect is depending on distance, moving for the and back, if you are not aggressive on the sand back you will never be aggressive, rearranged structure, structure in 2. degree, structure in a infinite situation, anatomy of a sand back, definite of  plastic coating, a number of determinable structures, consider variation in figures, feel free to choose any point of departure: Structure/effect.

Do you believe in the natural, it is sliding of hand, place the left foot well in front, not too far, as this will weaken the effect of the punch, when you move the left arm, there is several ways you can punch a straight left, you can punch a roundhouse or a upper cut, which ever you choose, you have to make sure that the distance is right, that you have chosen the right position of your feet, that the turn of your body is correct, that the object you are hitting is moving in the right direction, and will be in the determined place at time of your punch, otherwise the effect could have a disastrous outcome, an attack is a opening of the defence, and, dependent on your type of defence, the attack can have a build in defence, you can defend your self in close quarter, that is keep your arms close to your body, or use the in fight method, defence on half distance, that is to brush the opponents punches, long distance defence keep the opponent away with the long left, move yourself in where it happens, reflection in the sand back, you imagine the opponent, it is all happening within yourself.

Postscript: Things are changeable, the young man danced, there are left over from yesterdays anatomy of the sand back, combine as you like.

A book of reasonable left outs.
A performance collage: Spinning Eyeball, Transcendental Sandwich and Rape of a Chambermaid. 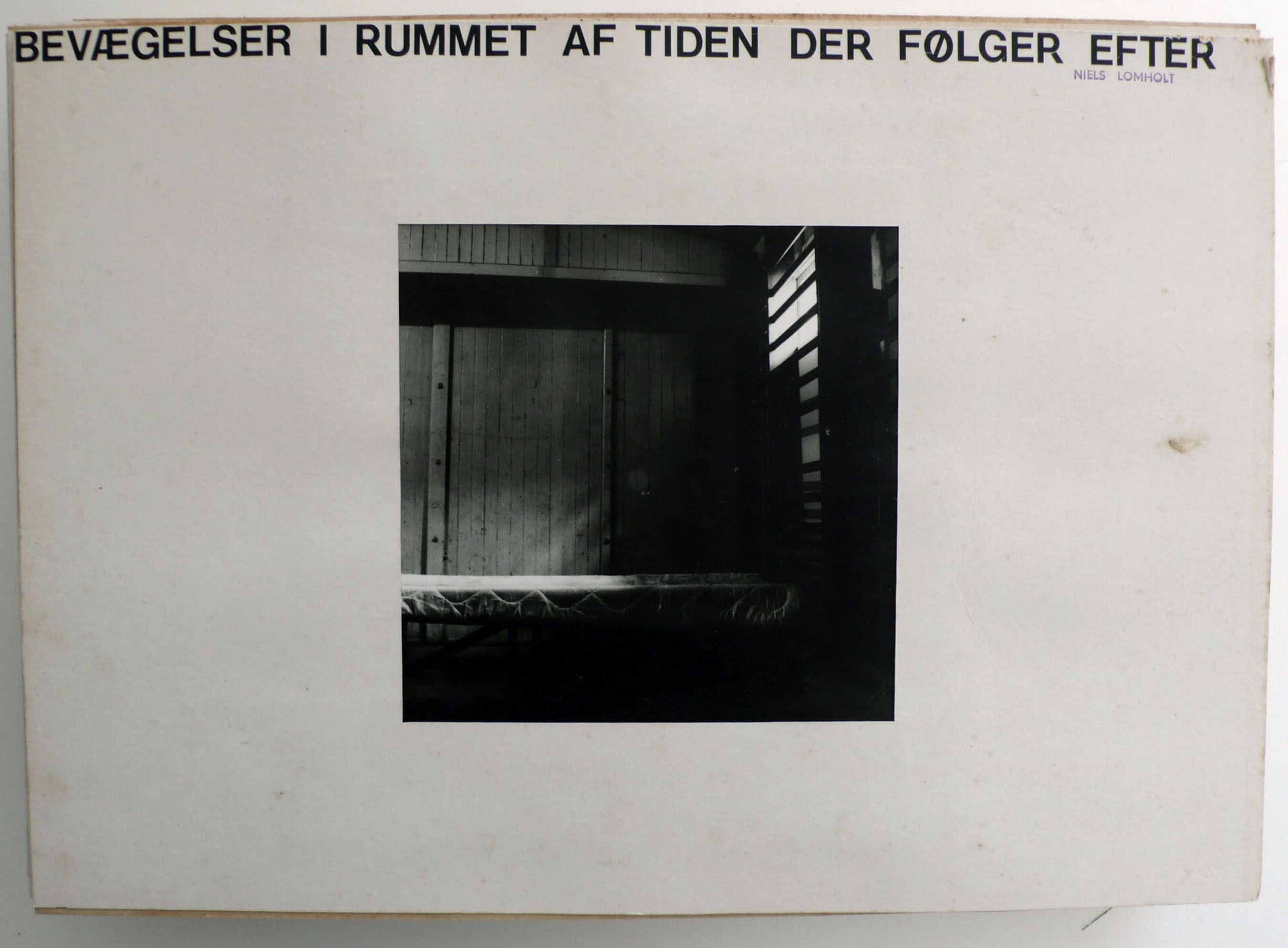 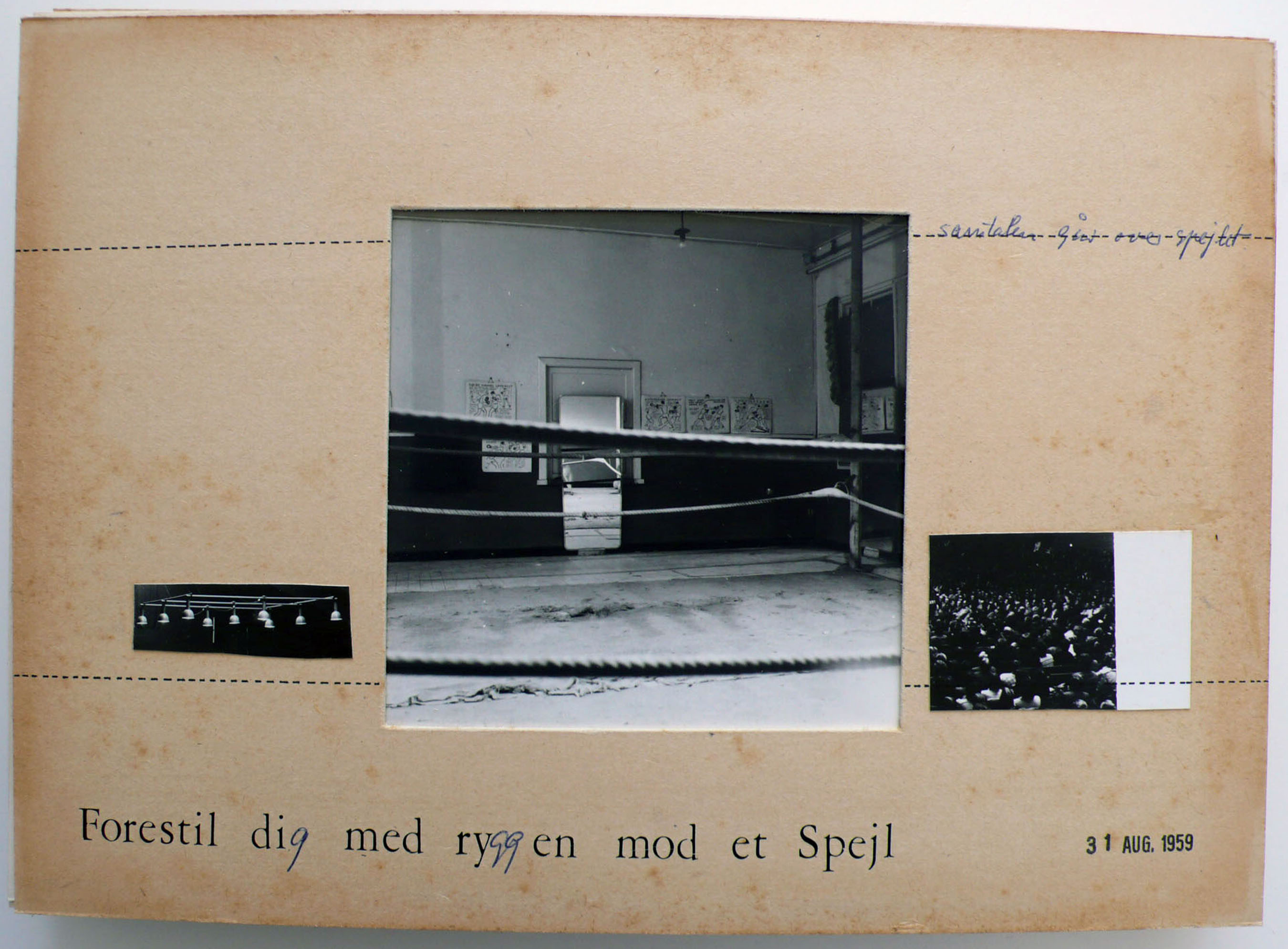 Short stories appear on the sound track, the video and slides are merged by the protagonist preparing his meal: The transcendental sandwich concerning political correctness, and structuring of society (stomach comes first, then morality).

ONE MORNING IN THE SANDWICH LIFE

Somebody placed a sandwich in my room. I used to like looking out the window, look at the long vide street, the cars, people walking or running to catch the bus. But now this sandwich, two sandwiches, to be precise, on a white sheet, on my writing desk, the shadow from the window keep moving across the desk, the Venetian blinds you see. Lots of sound coming up from the street, somebody is walking around in the room next door, maybe cleaning, could be looking for something.

A NEW IDEA 1. Hierarchy. Each of the sandwiches are brought to the table and slowly taking its place in the making. First there on the table, brought from the supermarket, one big loaf of bread, butter, one green cucumber and salt. How it all started I don’t know, I only witness the end, but the cucumber must have felt a natural right to be on top with help of God or whatever. I must admit the cucumber has some qualities that could justify a place on top, but not all the time, it is long and green a aesthetic fellow of a very sensitive nature, delicate of taste and impossible to preserve in its original state. Bread is nice, but on its own, dry. Butter and salt, you could not eat it on its own. And besides that the cucumber has such a short time to become a part of the cucumber sandwich. Conclusion: There are good arguments for the cucumber to be on top.

NOTE: A green finger from Robin Crozier to Pat Larter dressed up as an Australian post official.

A NEW IDEA 2. Fulfilment of purpose. Bread feeds the hungry. Butter bring health. Salt strengthen the chemistry of the body. Cucumber has a nice taste. This sandwich has been through a lot, in dark places, in dusty places, it could have been in purgatory. Bread goes to the body furnace, brings fuel to the fire, the butter melts into the bread, so does the salt, but the cucumber goes under.

A NEW IDEA 3. The intellectual. This is not going to be the last supper. No final statement is within sight. The spinning eyeball has made an objective observation of the sandwich,, has remarked on works of mind, works of emotion, ”Familien Ähnlichkeiten”, have tried renaming, have pointed in different directions, left the sandwich in the hands of time, but is still searching. I can identify and analyze the shape, the colour and the taste of the sandwich, from an almost complete universe of a convincing nature around this sandwich structure .The cucumber is grown in the garden, I planted the seed myself, brought water, saw the flowers, bright and yellow, saw the long shape taking form, I brought it to the kitchen table, cut it in slices, put it on the bread, I remember stories of combustion how each substance takes a new shape in the bodies chemistry, I know.

A NEW IDEA 6. By coincidence.
Note: On the Spinning Eyeball.
Q: Does it satisfy you to examine your eyeballs? 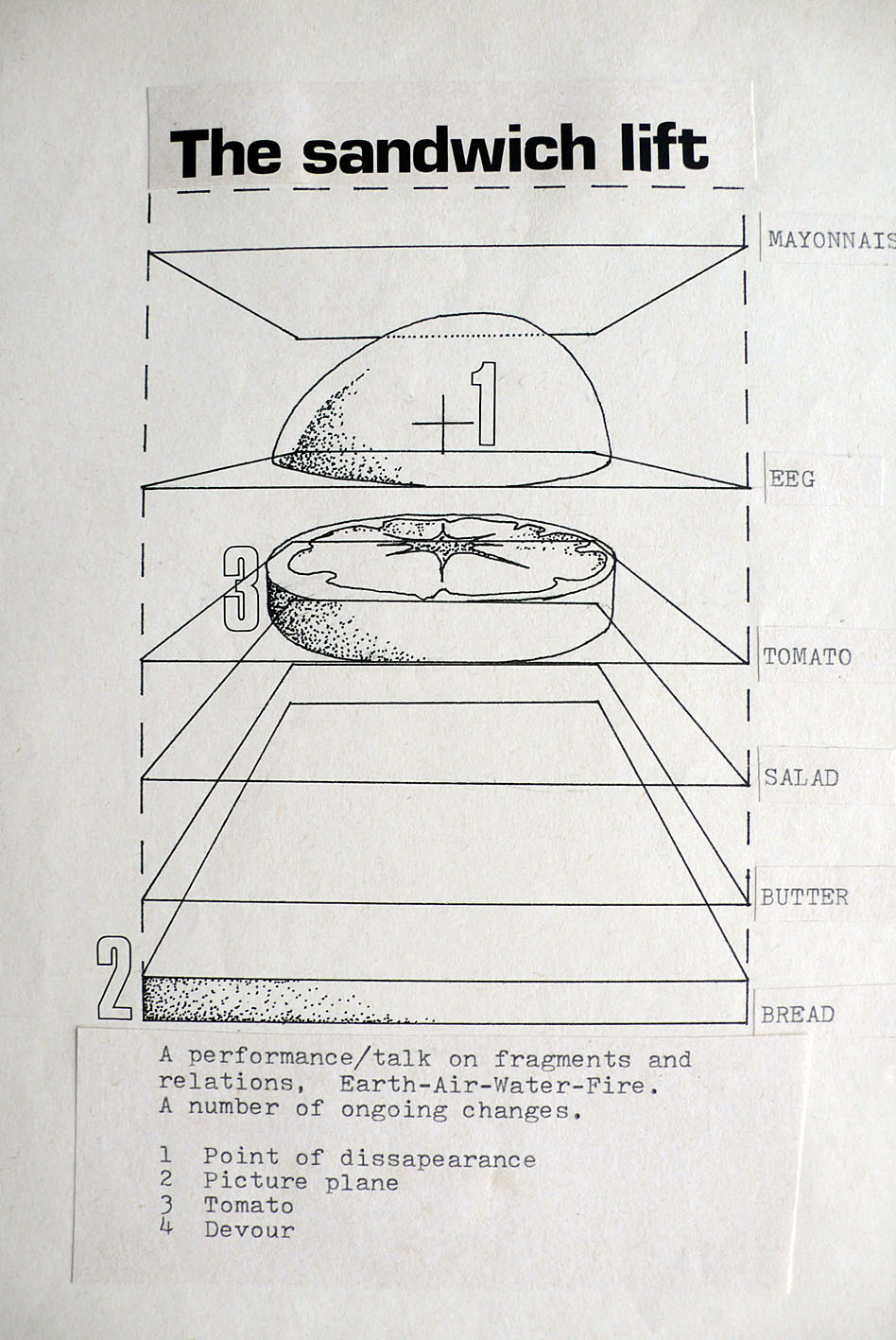 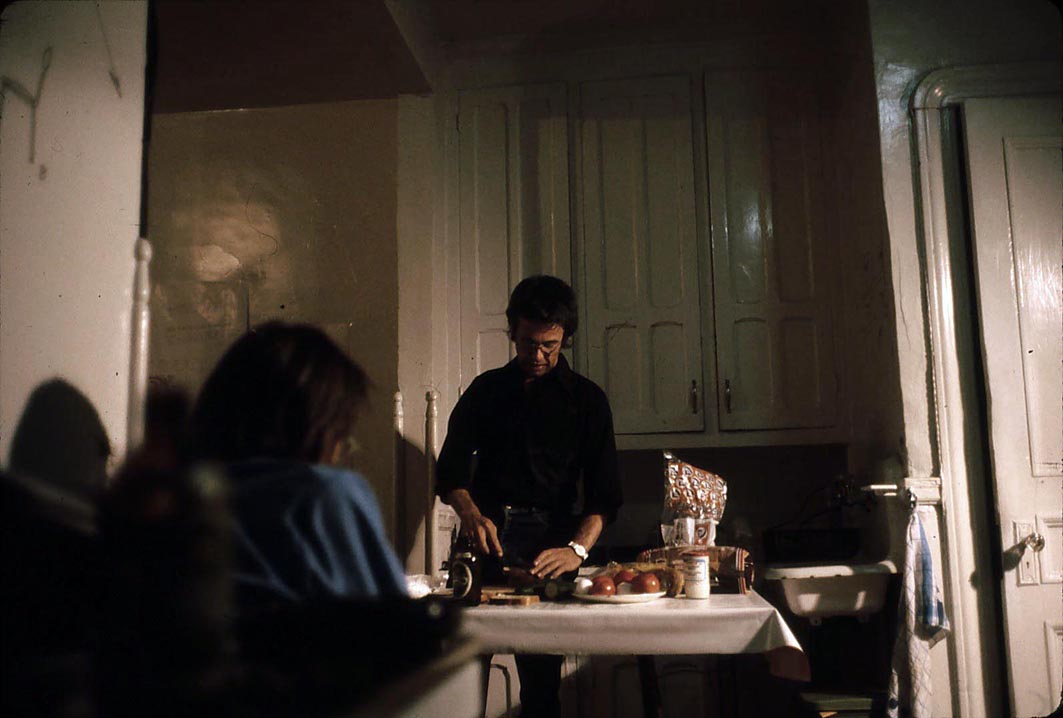 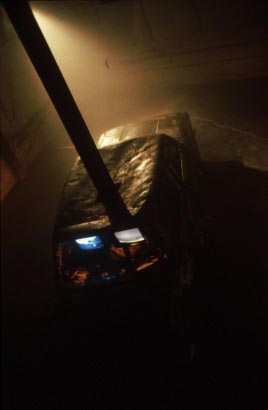 A person with a distant undefinable smile.
but a lucky hand
hiding, yet framed in.
A blink of the blade is visible and the tight grip of the hand
floating in the unknown land of the shadows above the violent
language of the sea.

In as much as something else is taking place, the invisible, the fish waiting in its element.
Spinning in circles, letting the hand depict, arrange in tableaux.
Apparently
- and the fish came at him, as always, washed yet not clean but
insisting to be, present.

A mute smile, and silk seeking and the hand projects the cone of light                      forward with the unquenchable thirst of a longing, of the open sea.
Of a smile, even?
Overwhelmed by fatigue, penetrating, the dust
- breaking the desire to lay down and rest.
”Ich will lieber Tanzen”
the fish declares with a wry smile.
She turn towards him, digitalized in the pulse of breath
and the time and image and silk and dancing, they do
one wanting to, the other not. 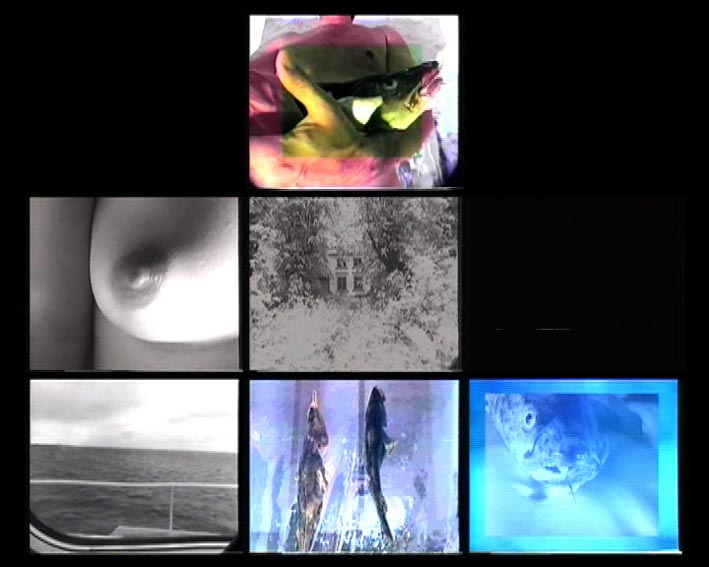 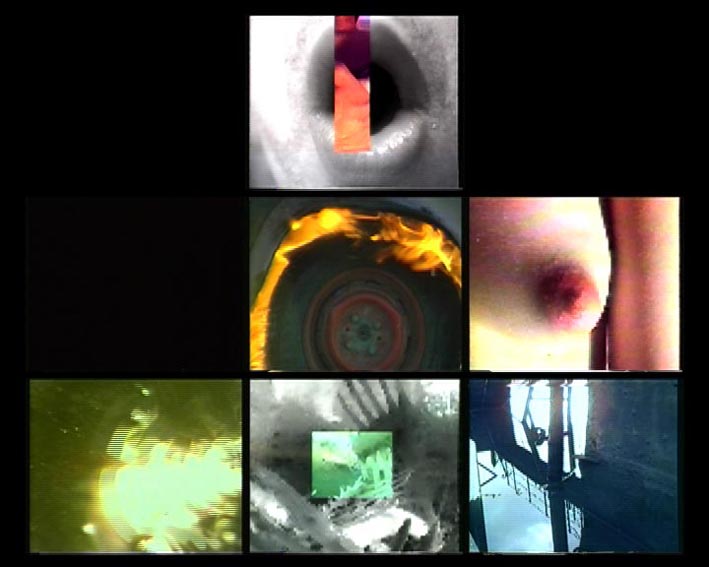